We Are Union Members – Let’s Vote That Way

Support for organized labor across the US is as strong as it has been in decades. We at IBEW 2222 have a best-in-the-industry contract because when we need to we stick together. All of that can change in a moment, with a single election. Please take a moment to read this article, and vote like your livelihood depends on it – because it does!

For nearly two years, control of both congressional chambers and the White House cleared the way for Democrats to unilaterally enact more pro-union policies than most had thought possible — and do so with little to no resistance.

This fall could change everything.

Republicans are heavily favored to win back the House in the midterm election — and if they do, cracking down on anything they see as tilting the scales toward organized labor will be one of their first orders of business. Already, GOP members are laying the groundwork for intense scrutiny of the Labor Department, the National Labor Relations Board and the administration itself.

“I’ve joked with my colleagues that we will probably be holding two oversight hearings a day, because we’re going to be so busy with oversight,” Rep. Virginia Foxx of North Carolina, the top Republican on the House Education and Labor Committee, said with a laugh. “We’re going to hold the NLRB and DOL accountable.”

Foxx confirmed to POLITICO that she is angling for a term-limit waiver that would allow her to command the committee’s gavel if her party does take the majority.

“That’s the track I’m on,” she said. “Right now, I have no opposition, and I have a lot of support for it.”

Rep. Elise Stefanik (R-N.Y.), also a member of the panel, had been rumored to be interested in the job before a news report this week indicated she would instead run again for a House GOP leadership post.

Foxx said the 57 letters she and her colleagues already have sent to various agencies seeking a range of information about labor policy decisions since President Joe Biden took office are guideposts for some of what they will focus on— thought not all.There will be “a lot more,” she said.

On the agenda: potential conflicts of interest at the NLRB; the task force the White House formed to encourage organized labor; and Labor Secretary Marty Walsh’s involvement in labor disputes, as well as a wide array of union-related regulations from DOL and memos penned by NLRB General Counsel Jennifer Abruzzo.

Particularly given how much oversight Democrats conducted of the Trump administration, “there is a tremendous sense of payback” among Republican lawmakers, said attorney Michael Lotito, who represents employers at the law firm Littler. “I mean, I have never seen a sense of payback like this.” 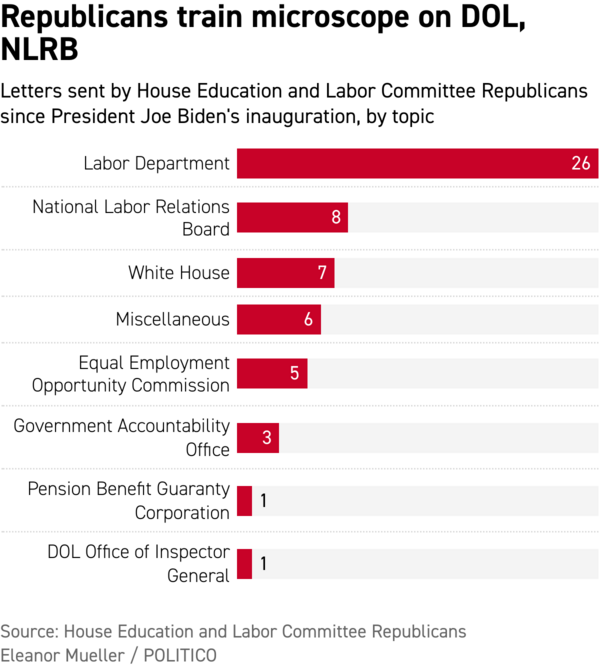 Union officials warn that Republicans could pay a political price for being too aggressive, given that unions’ approval rate is the highest in nearly six decades.

“It just looks really bad,” said Jon Shleuss, president of CWA-NewsGuild, which represents media outlets, including POLITICO. “Why don’t we just want people to have well-paid jobs where they’re protected and employed someplace? That should be the goal of every politician everywhere.”

They also warn of the potential economic consequences of cracking down on what Association of Flight Attendants-CWA President Sara Nelson called the “the only check on greed in capitalism.”

“People set the rules for our economy when the people have a voice,” Nelson said. “The GOP is making clear with these plans that they stand with billionaires and unchecked greed, not the American people.”

Agencies are already bracing for impact. Abruzzo said she is well aware of the heightened scrutiny she will face and prepared to “address inquiries as they arise.”

“My expectations are that I will get more oversight” than previous general counsels, Abruzzo said. “Virginia Foxx has certainly been very vocal about me, and about the agency, and so presumably if the Republicans win, then I would expect — since she’s so focused on it — that I would get more oversight from her.”

Republicans’ microscope on the NLRB will focus on the agency’s composition, among other things. Biden’s nomination of two union officials — CWA veteran Abruzzo and SEIU alum David Prouty — shortly after his inauguration quickly drew the ire of Foxx and others.

“Right now, every office that President Biden has been able to fill, he filled them with union bosses,” Foxx, a former member of the House Oversight and Reform Committee, said. “We will not ignore union corruption when we see it, and we believe there’s a fair amount of it.”

All of these directives, Republicans and employers claim, overstep the bounds of current law. 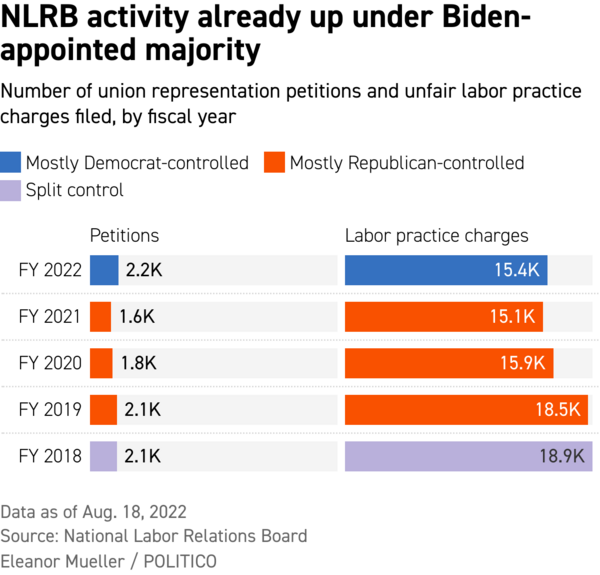 At DOL, Republicans will target a wide range of proposed and final regulations that they say unfairly skew toward unions, including those policing prevailing wages, registered apprenticeships, federal contractors, joint employers, visa programs and independent contractors.

Foxx highlighted one rule in particular that repealed a Trump-era rule requiring some unions to include more information in annual financial disclosure forms.

“This is a slap in the face to workers who pay their dues, and expect that their money is being spent well,” Foxx said. “The union shouldn’t be exempt from financial oversight. And we’re going to get these transparency requirements met however we’re able to do that.”

The GOP’s oversight of the agency will not be limited to union issues alone. Republicans also plan to delve into things like the agency’s vaccine-or-test mandate that ran aground before the Supreme Court.

“We will hold OSHA accountable for its radical overreach against America’s job creators, including its illegal vaccine mandate that imposed government control into the private, medical lives of millions of American citizens and hurt our nation’s workers, employers, and small businesses,” Stefanik said.

Throughout it all, Republicans willhave another key tool at their disposal: the appropriations process. A Republican House majority would no doubt allocate far fewer resources to OSHA, the Wage and Hour Division, and other DOL agencies, influencing how those officials do their jobs.

As for Walsh, Republicans have questions about his visit to a Kellogg’s picket line in 2021, which they have already raised in multiple letters.

GOP lawmakers also want to know more about Biden’s Task Force on Worker Organizing and Empowerment, which they have called a “waste of both time and taxpayer resources” that “explicitly instructs government agencies to bias themselves for the benefit of unions.”

We will post the names of all active and retired members as we are made aware of their passing.
Please call or email any death notices – Thank You

Around the corner, I have a friend,
In this great city that has no end;
Yet days go by, and weeks rush on,
And before I know it, a year is gone,
And I never see my old friend’s face,
For Life is a swift and terrible race.
He knows I like him just as well
As in the days when I rang his bell.
And he rang mine.
We were younger then,
And now we are busy, tired men:
Tired with playing a foolish game,
Tired with trying to make a name.
“Tomorrow,” I say, “I will call on Jim,
Just to show that I’m thinking of him.”
But tomorrow comes, and tomorrow goes,
And the distances between us grows and grows.
Around the corner, yet miles away . . .
“Here’s a telegram, sir…
Jim died today.”
And that’s what we get, and deserve in the end:
Around the corner, a vanished friend.

Please consider donating to the IBEW 2222 Benevolent Fund, which is used to support charities our members are involved with. Thank You!

OUR GOAL IS 100% PARTICIPATION IN C.O.P.E.
Now more than ever it is imperative that we have our friends in elected offices. We need all the help we can get to fight back corporate greed and maintain our job security through our negotiations for a new contract. Please CLICK HERE to sign up for C.O.P.E. A couple bucks a week is a small price to pay. Hang Tough!

If you’d like to get involved, or to stay updated on C.O.P.E. information, please fill out the form below.

The IBEW & Local 2222 are committed to improving the lives workers and their families. With more than 700,000 members, the IBEW is among the world’s strongest labor organizations, representing workers in a range of skilled occupations in a wide variety of fields. Tell your friends & Families the benefits of being a union member.

Verizon Employees – You can double your charitable donation by registering to have it matched by the company.

Please CLICK HERE to register for a VZ matching donation

New Discount Program for Our Members

In addition to our ongoing Member Discounts, IBEW Local 2222 is excited to offer our members the Working Advantage Discount Program, your one-stop shop for exclusive and convenient savings on the products, services, and experiences you know and love.

It’s cost-free and easy to enroll. Just visit www.workingadvantage.com/ and use the company code IBEWPERKS to begin receiving discounts on:

Cell Phones For Soldiers began in 2004 as the idea of two patriotic kids who wanted to give back to the men and women who dedicate their lives to protecting us each and every day. To date, the charity has provided more than 300 million Minutes That Matter to our troops serving around the world, and it continues Helping Heroes Home via emergency funds that so far has assisted more than 3,100 veterans and their families.